News from the Vault: What Christian Schools Really Teach

9 And they came to the place which God had told him of; and Abraham built an altar there, and laid the wood in order, and bound Isaac his son, and laid him on the altar upon the wood. 10 And Abraham stretched forth his hand, and took the knife to slay his son.11 And the angel of the LORD called unto him out of heaven, and said, Abraham, Abraham: and he said, Here am I.12 And he said, Lay not thine hand upon the lad, neither do thou any thing unto him: for now I know that thou fearest God, seeing thou hast not withheld thy son, thine only son from me. 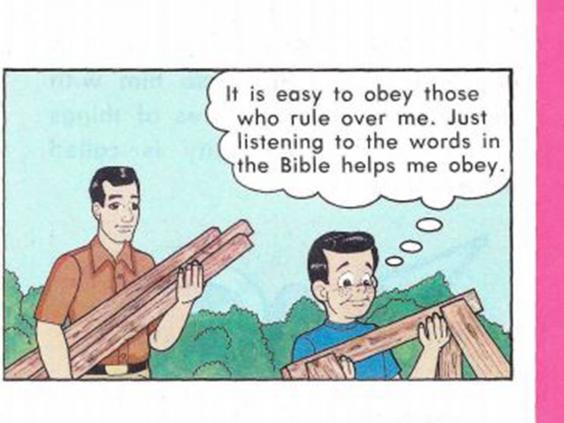 Christian fundamentalist schools are teaching girls they must obey men, at The Independent, which goes on to say:

Christian fundamentalist schools are teaching children creationism is fact, that gay people are “unnatural” and that girls must submit to men, according to a series of claims.Former pupils and whistle-blowers have told The Independent that the schools, which originated in the US but are now dotted around the UK and registered as independent or private schools, teach children at isolated desks separated by “dividers” from other students. It is thought more than a thousand children are being taught at dozens of schools, although little is known about them.“No one outside the schools knows about what happens inside them, that’s why they’ve been able to go on like this for so long," a former pupil said.More than a decade after leaving, she says she is now horrified at the education she received.

She's not the only one, as I can personally attest to this as well. The following are excerpts from this particular school system's textbooks:

One textbook says: “Homosexual, adjective: having unnatural sexual feelings towards one of the same sex… Homosexual activity is another of man’s corruptions of God’s plan. 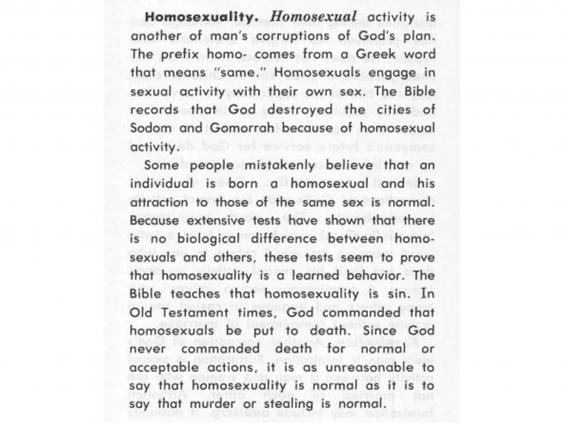 Accelerated Christian Education textbook which former pupils say are used in the schools (Accelerated Christian Education textbook)“The Bible records that God destroyed the cities of Sodom and Gomorrah because of homosexual activity. Some people mistakenly believe that an individual is born a homosexual and his attraction to those of the same sex is normal.”Textbooks say of the role of women and girls and society: “God has given both the husband and the wife certain areas of responsibility in the home. The husband is to be the leader of the home, loving his wife even as Christ loved the church… The wife is to obey, respect and submit to the leadership of her husband, serving as a helper to him… She is available all times day or night.”

The article goes on to quote a former student:

A section titled ‘Testimony of a Homemaker’ in one textbook reads: “God desires for me to submit to my husband, train up my children, see that my house is properly supplied, pray without ceasing, teach other women to love their husbands and children, and be discreet, pure and a keeper of my home.” 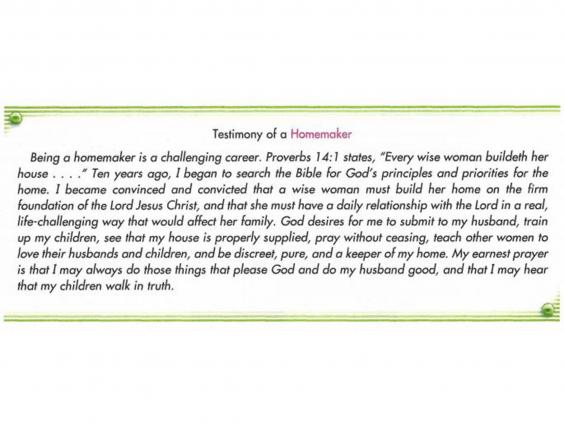 (A passage from an Accelerated Christian Education textbook about the role of a 'homemaker')Former pupil Cheryl Povey who attended an ACE school in Bath, said: “I came across a lot of sexism. I remember as a girl finding it quite shocking. We were taught that if you’re a woman, you should be subservient to men; your husband, your pastor and other male figures.“There was a strong culture of men being revered and women being dangerously sexual and having to cover up. It made me self-conscious of being a woman.”

And how much is that education really worth?

Former pupils say they are instead taught towards an ICCE- an International Certificate of Christian Education. The ICCE is not an officially recognised qualification meaning those who hold it can struggle to find employment or to be accepted into higher education such as university. Former pupilssay this disadvantages children and deprives them of opportunities later, unless they retrain as adults to gain additional, mainstream qualifications as well as the ICCE......[The interviewee] added that he is concerned by the 'Christian certificates' children sit instead of official qualifications, telling The Independent: “Since 2014, the Advertising Standards Authority has upheld three complaints against ACE schools for exaggerating the acceptability of the certificates [International Certificate of Christian Education] they offer. I have met numerous former ACE students who have had to return to college as adults to gain qualifications that they would have earned as a matter of course in mainstream schools. All English secondary schools should be required by law to prepare and enter students for qualifications recognised by Ofqual, the exam watchdog.”

I myself was raised in Christian Schools from 9 years old to 19. Every single one of these bible based tenets were actively taught in all the schools I attended, though with perhaps less stridency than the school being investigated here. And I heard worse. One "social studies" teacher literally explained to a room full of 14 year olds that all gay men are child abusers, members of NAMBLA, and that their motto to live by suggests they'd be uninterested in anyone older than eight. Another teacher told a student with cystic fibrosis that demons were battling for her soul and had taken hold of her body. In college, history courses tended to focus on specifically religious occasions of importance, and I emerged from my studies with a much greater understanding of, say Francis of Assisi, than of the civil rights movement or feminism.
The deeper problem, of course, is that parents take Genesis 22 seriously; they believe that their god is the source of all knowledge and truth, and thus to submit their children to its instructions via these schools is not just being a good Christian, but providing the right and proper education to them. An education which often proclaims "Even from a strictly scientific standpoint, the theory of evolution is absurd."
And of course these schools are often provided all the benefits of a religious 501c3, meaning we all as taxpayers fund their continued existence. Having spent so many years thus institutionalized, I suspect few have paid as much as I have.
Should parents alone decide on their children's education, and in doing so commit them to a future they didn't choose? If not, should the government do so, and on what standard?
at August 09, 2019
Email ThisBlogThis!Share to TwitterShare to FacebookShare to Pinterest