News from the Vault: About that Orbiting Teapot and Invisible Pink Elephant Business...

In all the recent conversations about what atheism is, what can be disproved and what cannot, both here at the RC and elsewhere, I realized there was a pervasive, basic misunderstanding of what it means to propose something exists in the first place. 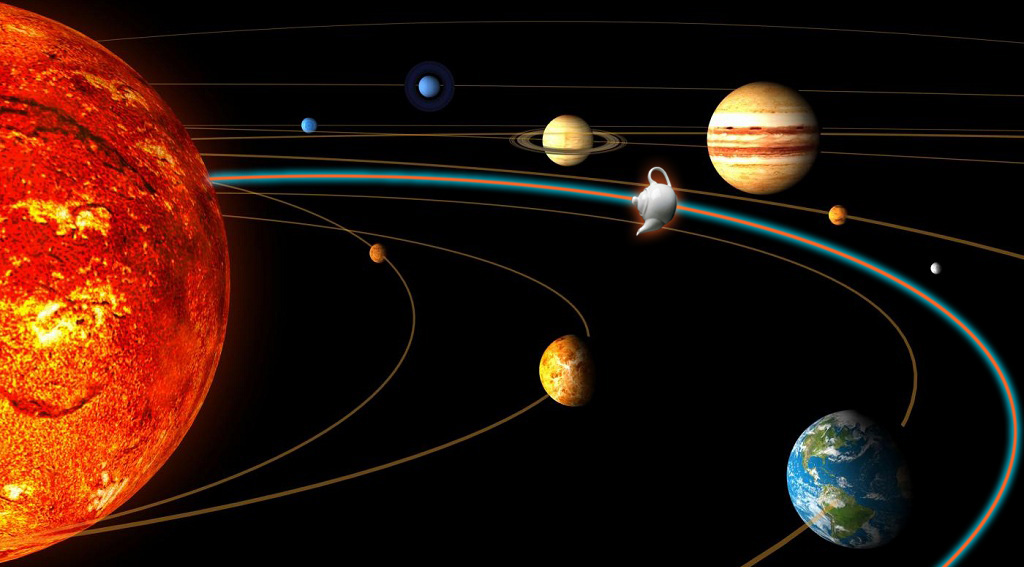 I'll start with Bertrand Russell's example of the flying teapot. This is thought by non-theists and sometimes theists alike to firmly establish as fact that a negative cannot be proved. You're all familiar with the thought experiment, which in the 1950s when he made it still had some currency to it: if one was to claim a teapot was orbiting somewhere between earth and Mars, should you believe it because it cannot be disproved? There are two ironies here. One, today we could falsify the claim as the technology to observe the solar system has improved almost immeasurably since the 1950s. Two, Russell was quite clear that it is possible to prove a negative. His example was carefully designed to be unfalsifiable, but the inability to prove a negative is by no means universal.
Actually, there's a third irony. While Russell did intend his example to illustrate the necessity of the claimant bearing the burden of proof, his work in analytical logic provides a concrete foundation for his concluding remarks about this teapot, which is that anyone should rightly conclude the claimant was talking nonsense.
Nonsense in this regard has a specific meaning: it is a particular kind of proposal which engages in circular reasoning. To refer to something in the real world, where sense data is the necessary means by which knowledge of the external world can be gained, one needs a referent available to the senses. That referent, say Frederick, the Prince of Denmark, is an objective, material thing which can be measured, observed, poked, and prodded. When we say "Frederick is the Prince of Denmark" we can know specifically what the referent is, which is some guy living rather well in the nicest city in the world, Copenhagen.
If the referent were Hamlet, Prince of Denmark, and the referent was said to be real in the way that Frederick is, how would we know it? By its description, natch. But this description serves to give the reference meaning without the referent ( there being no actual Hamlet available to the senses ). The description however is given meaning by the reference to Hamlet ( the fictional one ), and thus the proposition that a real Hamlet exists is defined by a description which is defined by the proposition itself. In other words, nonsense.
Props if you're still with me, since I am only now going to make all this into a simple one liner: it is impossible to reason one's way to empirical fact. For the reason described above, one can never establish the actual existence of something in the real world without a real world referent. One becomes dependent on an endless series of circular references.
So, about that teapot. Russell's point was not that it couldn't be disproved. Russell's point was that it could not be established. It literally cannot be claimed to exist in any meaningful way.
And those invisible pink elephants? They're easy: they do not and cannot exist, for the simple reason that the color pink requires the reflection of certain wavelengths of light, and invisibility requires that all visible wavelengths pass through it. It is therefore a contradiction in terms, and cannot exist. Purple vampires on planet Transsexual? They needn't be disproved because they cannot be asserted.
Questions, then:1) Can the existence of Manbearpig be disproved?2) Can the sum 2 + 2 = 5 be proved false?3) Who wants to say anything meaningful, anyway?
at August 09, 2019
Email ThisBlogThis!Share to TwitterShare to FacebookShare to Pinterest